Here are some amazing benefits and uses of hydrogen peroxide:

Note: Always make sure that you use appropriate dosages and be careful not to overdose peroxide.

Bleach cycle – an alternative to bleach

Add a cup of peroxide to the white laundry. Peroxide is great to get rid of blood stains on clothes and carpets. If there is blood on clothing, pour peroxide directly on the stain, leave it for a minute, then rub it and rinse with cold water. Repeat if necessary.

Health
Your body produces hydrogen peroxide to fight infection which must be present for your immune system to function properly. White blood cells called leukocytes know them. A subclass of leukocytes called neutrophils produce hydrogen peroxide as a first line of defense against toxins, parasites, bacteria, viruses and yeasts.

Bath rejuvenation and detoxification
Uses about 2 liters of concentrated hydrogen peroxide 3% in a tub filled with warm water. Stay in the water for at least ½ hour, adding hot water as needed to maintain a comfortable temperature.

Foot fungus
Though studies are needed to show that this solution works for everyone, it is a quick home remedy worth trying. To help treat foot fungus, spraying a mixture 50% / 50% hydrogen peroxide and water on foot (in particular toes) every night and let dry. 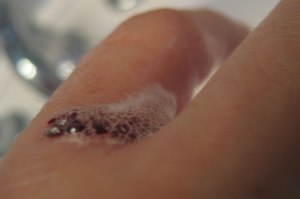 Infection
Soak any infections or cuts in 3% peroxide solution for ten minutes several times a day. Even gangrene that would not heal with any medicine was healed by soaking in hydrogen peroxide. Put half a bottle of peroxide in the bath to get rid of boils, fungus, or other skin infections.

Chicken mite infections
Patients infected with small mites report that hydrogen peroxide effectively kills mites in their skin. They spray peroxide on the skin a few times in a row (with a few minutes between the applications of spray solution) with amazing results.

Sinus infections
A tablespoon of 3% peroxide added to a cup of non-chlorinated water can be used as a nasal spray, depending on the degree of sinus involvement, one can adjust the amount of peroxide used.

Wound Care
Peroxide 3% is used medically for cleaning wounds, removing dead tissue, and as a debridement agent (disinfectant) oral. Peroxide stops capillary bleeding.
Some sources recommend soaking infections or cuts for five to ten minutes several times a day, however washing and rinsing enough. You should not leave the solution on open tissue for extended periods of time because, like many oxidative antiseptics, hydrogen peroxide causes mild tissue injury in open wounds. It is therefore important to use with caution. 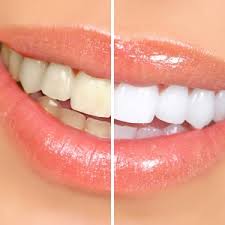 Dental care
Take one teaspoon and keep it in your mouth for 10 minutes daily, then spit out the contents. You’ll never have sores and your teeth will be whiter. If you have tooth pain and you can not go immediately to the dentist , put a teaspoon of 3% peroxide into your mouth and hold it for ten minutes several times a day. The pain will be reduced.

Mouthwash
Many people do not realize that hydrogen peroxide mouthwash is a very effective and inexpensive. Uses 3% H202 – add some liquid chlorophyll for flavoring if desired.

Toothpaste
Use baking soda and add enough 3% H202 to make a paste.
Cleaning the teeth by brushing
Or just dip the brush in 3% H202 and brush your teeth. Dip the toothbrush in peroxide to keep it free of infectious germs.

Toothache
Hydrogen peroxide is an analgesic; however, as antiviral agents, antibacterial and antifungal, is effective in treating pathogens that cause infections; rinse mouth with peroxide several times a day.

Teeth Whitening
Using 3% hydrogen peroxide as a mouthwash for a period, I noticed that my teeth were bleached without effort.

Opening the hair color
The peroxide bleaching agent is used to open and hair color. 3% peroxide diluted with water (50% / 50%), and spray the solution on your wet hair after a shower and comb your hair for the solution to penetrate evenly into damp hair.

Contact Lenses
Hydrogen peroxide is used as a disinfectant in the cleaning solution frictionless lenses CIBA Vision’s Clear Care, with its ability to break down proteins that accumulate on the lens of the eye due to immune response, resulting in greater comfort for those with sensitive eyes. 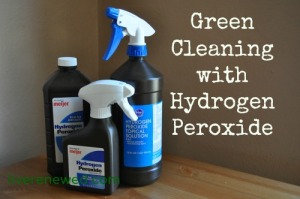 Hydrogen peroxide as such or diluted
Clean tables or kitchen work surfaces with peroxide to kill germs and leave behind a fresh scent. Just put some peroxide on cloth wipe or spray that on the blackboard. Peroxide used to clean glass and mirrors without leaving dry spots. Keep a spray bottle of 3% concentration (undiluted) to disinfect inside refrigerators and boxes of children’s snacks.

Mold
Clean with peroxide when your house becomes biologically contaminated because of mold, such as the homes with dampness.

In dishwasher
Add 60 ml of 3% peroxide your dishwater detergent.
Fill a spray bottle with a mixture of equal parts 3% hydrogen peroxide and water and keep it in every bathroom to disinfect without damaging leaks, as happens with chlorine or other disinfectants.

Laundry / stain removal
3% hydrogen peroxide solution is the best anti-stain if used quickly enough after spotting – although blood stains two days old were removed successfully. But it must be considered that will discolor the colored fabrics.
H2O2 3% should be applied to clothing before blood stains stained be accidentally “fixed” with warm water. Cold water and soap are then used to remove the peroxide treated blood.